The Mexican government is hoping that people will be distracted by the Christmas holidays and will forget the disappeared, particularly the search for the #42 #Ayotzinapa students. Do not let the Mexican government do that. Send the following message to twitter @EPN @PresidenciaMX “Search for the disappeared. Bring them back alive.” Here it is a video of the families of the #42 missing students describing how their Christmas is going to be this year.

A shocking attack on students has ignited Mexico and must spur us to action too | Amnesty International Canada.

August 30th is the International Day of the Disappeared. This day raises awareness of the fate of individuals whose whereabouts is unknown to their relatives and/or legal representatives in cases of involuntary disappereances because of armed conflict or authoritarian regimes. In preparation for this day, different human rights organizations and families of the disappeared are carrying out different events tomorrow throughout Mexico. Please support the families by sending a twitter to Mexico’s president asking him to #findthedisappeared@PresidenciaMX

If the twitter messages come from abroad, you will giving the families a lot of support. 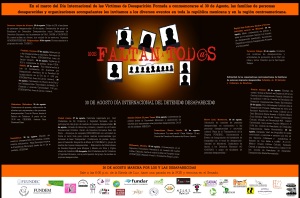 The effects of the crisis on unemployment, wages and benefits have put Mexicans in a situation of economic insecurity. Disappearances complicate the economic circumstances of a victim’s family. The disappeared contributed with an important share of the household income through wages and social benefits such as health care and government housing assistance in the National Workers Housing Fund Institute (Instituto Nacional para el Fomento de la Vivienda de los Trabajadores or INFONAVIT). Families of the disappeared cannot receive any pension payments because the whereabouts of the victim is unknown, and therefore she or he cannot be declared dead. Also, the situation of uncertainty and worry for their loved ones has impacted families’ physical and emotional health. Health expenses therefore add to the costs of investigation and litigation in the absence of state authorities’ investigations in the context of economic and physical insecurity in the country.

If families want to retain social benefits and receive some form of pension, they have to apply for the presumption of death of the victim, which takes up to six year at least to complete. This impacts families emotionally because once the person is presumed dead, investigations end. Thus, families feel they betrayed their disappeared by having to choose access to basic services over looking for their missing relative.

END_OF_DOCUMENT_TOKEN_TO_BE_REPLACED

“The impunity during the dirty war in the 1970s in Mexico set the conditions for today’s disappearances. If something had been done before, this would not be happening today.” These were the words of Yanett Bautista, member of the Foundation Nadia Erika Bautista from Colombia. She discussed how the families of the disappeared have driven the process of justice in Colombia. Families are the one searching for their relatives and presenting law initiatives to Congress.  Examples of these are the law recognizing enforced disappearances as a crime and the homage law.  The latter involves the obligation of the state to create a Genetic Database of Unidentified Bodies and treat human remains according to international standards.

Federica Riccardi from Red Cross International expressed that search protocols need to have an open approach in terms of the kind of evidence that is included into the investigations such as photos, study of circumstances and witnesses’ testimonies.  These protocols have to be elaborated with the collaboration of the victims’ families.

END_OF_DOCUMENT_TOKEN_TO_BE_REPLACED

On June 5th, 2013, United Forces of Our Disappeared in Coahuila and Mexico (FUUNDEC/FUNDEM) organized a three day international event on Enforced Disappearances in Mexico in the city of Saltillo, capital of the state of Coahuila.  This is the first event of its kind in Mexico because it brings together the relatives of the disappeared, local and federal state authorities and national and international experts on the issue. The event began with the words of one of the members of FUUNDEC/FUNDEM, Lourdes Herrera.  She is the mother of Brandon Esteban, who is 8 year-old boy that was disappeared in August 2009. “I represent all families of the disappeared, …We hope that the outcome of these three days of work go beyond words to reach real commitments from all stakeholders in order to address our legitimate demands: the immediate search of our relatives and the right to justice and truth.” After her participation, all families claimed: “Our relatives were taken away from us alive, we want them back alive!”

Following the opening speech from Lourdes Herrera, Reinar Huhle, member of UN Committee against Enforced Disappearance mentioned in his keynote that enforced disappearances have become generalized phenomena.  It is not only found in military dictatorships but also in democracies such as Colombia and Mexico.  In the latter contexts, enforced disappearances become more complex given the involvement of both state and non-state actors.

The second keynote speaker was Roberto Garretón. He is an expert on enforced disappearance from Chile. He discussed how the state is always involved in any human rights violation. In the case of enforced disappearance, this includes not only the direct intervention of state actors but also their negligence and distortion of information. He focused on the Chilean experience. According to Garretón, the work of human rights defenders should be the search for the truth through interdisciplinary research and the recording of all cases of disappearance. He also mentioned how Mexico has not received any solidarity from Chile and Argentina in this human security crisis, even though Mexico opened its doors to refugees during military dictatorships and supported those Chileans and Argentineans who were fighting against enforced disappearances in their countries. 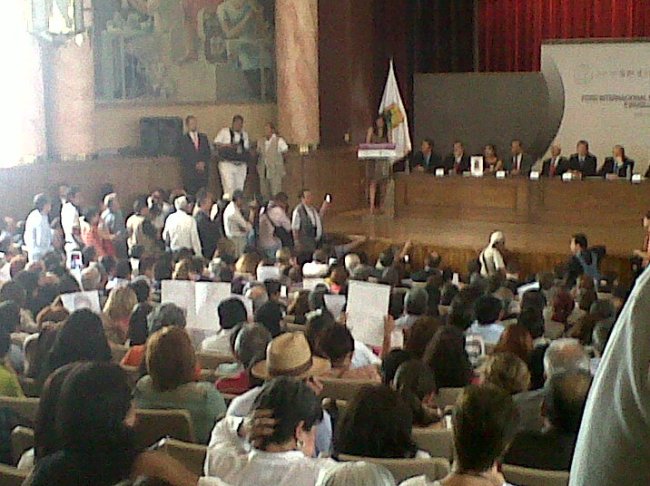 MEXICO CITY, May 14 2013 (IPS) – When people are forcibly disappeared in Mexico, it does not necessarily mean that the victims are immediately killed. In this country of entrenched violence, forced disappearance is also a method used to feed the markets for sexual exploitation and slave labour.

Mexico has regressed “to the barbarism of Roman gladiators,” lawyer Juan López, a legal adviser to Fuerzas Unidas por Nuestros Desparecidos en México (FUNDEM), a support group for families searching for their loved ones, initially in the northern state of Coahuila and now nationwide, told IPS.

In today’s Mexico, where organised crime is rampant and public security has been militarised, forced disappearances do not follow the pattern seen in past decades in this country and others in Latin America, marked by dictatorships, “dirty wars” against opponents and armed conflicts.

These days “just about anyone” is vulnerable, López said. An unknown proportion of the victims fall prey to “illegal businesses that produce lucrative profits from an unpaid slave labour force,” he said.

This includes the forced recruitment of teenagers and young adults as hired killers, workers in the production of drugs or to serve other needs of the cartels, or for organ trafficking.

“There have been confirmed reports of buses stopped by armed groups who take away all the young men,” López said.

END_OF_DOCUMENT_TOKEN_TO_BE_REPLACED

On May 9 a dozen women and a few men decided to begin a hunger strike in front of the modern facilities of the Attorney General’s Office to obtain an interview with President Enrique Peña Nieto and demand that he assign someone to be responsible for investigating the whereabouts of their relatives ‘disappeared’ in recent years. 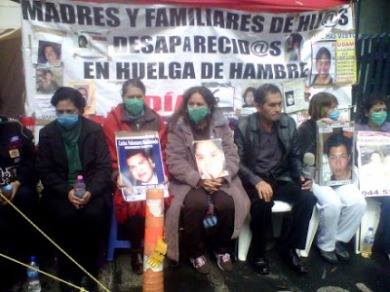 On May 9 a dozen women and a few men decided to begin a hunger strike in front of the modern facilities of the Attorney General’s Office to obtain an interview with President Enrique Peña Nieto and demand that he assign someone to be responsible for investigating the whereabouts of their relatives ‘disappeared’ in recent years. 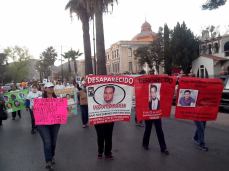 No More Blood in Mexico
Blog at WordPress.com.
Loading Comments...