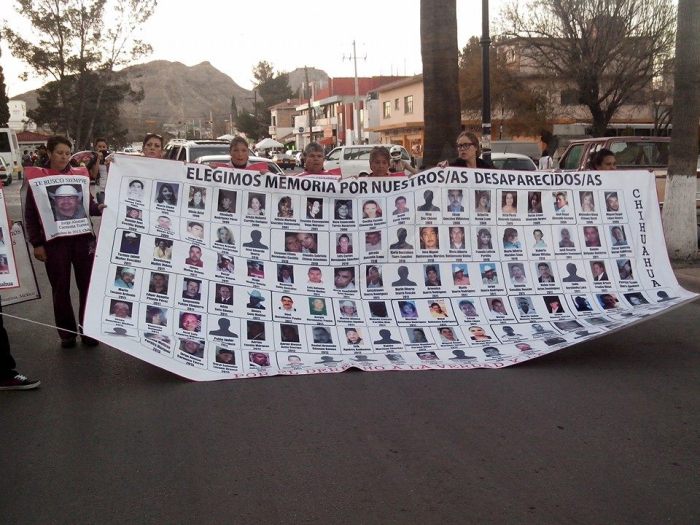 Families of the disappeared march from Torreon to Saltillo Coahuila to demand state authorities to follow adequate protocols in search operations (such as preserving evidence, avoid contamination of search locations, etc) (Photos by Itzel)

On February 8th, 2014, the Governor of Coahuila Ruben Moreira and the Assistant Attorney Juan José Yañez informed FUUNDEC and representatives of the UN Human Rights High Commissioner and the National Commission of Human rights about the recent search operations for the disappeared taking place in the northern region of the state of Coahuila. The governor affirmed that heavy machinery was not used in the operation, and journalists were not allowed in the search zone. He also mentioned that appropriate protocols for the collection of evidence were followed.

However, appropriate protocols were not followed as it was revealed by a news report released by the American channel Univision. The video shows how evidence was not preserved, the crime scene was not protected and heavy machinery was used. These practices are not compatible with international search protocols and diminish the possibilities of finding the disappeared and arrest those responsible for their disappearance. To the families of the victims, this search operation is more of a public relations strategy rather than a genuine effort to assist the victims and their families. For that reason, FUUNDEC decided to suspend any dialogue and consultation with state and federal authorities until the Governor of Coahuila and the General Commissioner of the Federal Police Enrique Galindo give FUUNDEC an explanation for the lack of appropriate protocol in the search operations.

FUUNDEC also asks international organizations for their assistance in the collection, classification and preservation of evidence that results from search operations. (In press release from January 31, 2014, FUUNDEC suggested the Government of Coahuila to join the Agreement of Collaboration for the Identification of Human Remains with the Attorney-in-General’s Office. This agreement was already used in the massacres of San Fernando and Cadereyta. The goal of this agreement is the creation of a Commission of Forensic Experts led by Argentina’s group of forensic anthropologists, which includes international and national forensic experts).

FUUNDEC is also organizing a “Truth Caravan” to demand results and the implementation of appropriate search protocols to state authorities. The caravan will depart from Torreon Coahuila on February 14th, 2014 and arrive the same day at the city of Saltillo, capital of the state.

Please contact the Governor of Coahuila on twitter @GobDeCoahuila and the Federal police @SSP_mx to show your support to the families in their protest.

Families of the disappeared protest in Coahuila for the lack of results in investigations, impunity and law-making and implementation.